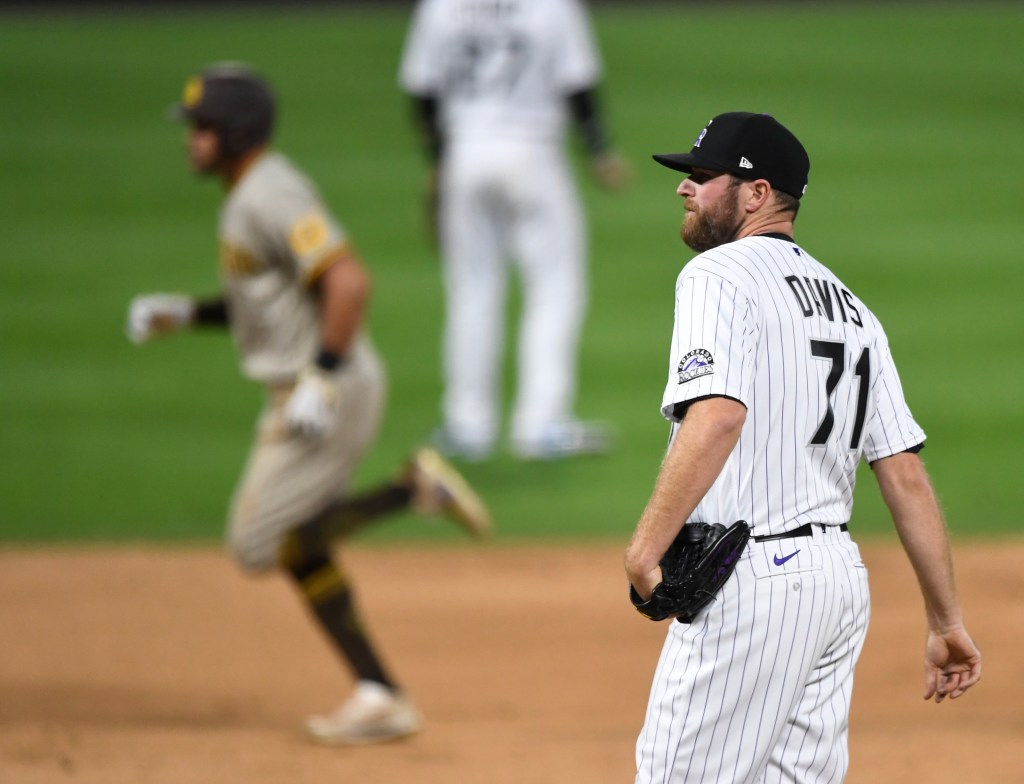 Since way back in spring training, the Rockies insisted that veteran right-hander Wade Davis still had the right stuff to be their closer.

The San Diego Padres hit two home runs and scored four runs off Davis in the ninth to beat the Rockies 8-7, spoiling the home opener on a perfect Friday night at Coors Field. The Padres improved to 6-2 while Colorado slipped to 4-2 and saw its four-game winning streak halted.

When manager Bud Black was asked how short the leash was on Davis, given that the season is only 60 games this year, Black replied: “It was a tough night for both closers. We are six games into the season and we are going to continue to watch all of our players. We are going to critique all of them on how they are throwing the ball.”

Colorado was one out away from victory when Fernando Tatis Jr. ripped a solo home run to left off Davis, tying the game at 5-all. Davis, 34, is trying to put the nightmare of 2019 behind him; a season in which he posted an 11.10 ERA and 2.014 WHIP in 29 games at Coors Field.

He hasn’t woken up yet. Trent Grisham walked and so did Manny Machado, setting up Tommy Pham’s game-winning, three-run homer.

Black said that Davis’ “stuff was fine and he got to two outs.” But Black acknowledged that Davis missed with his fastball on key pitches.

“Overall, his stuff was the same as it was in Texas,” Black said, referencing the two saves Davis notched in the opening series vs. the Rangers.

The Rockies did not go down quietly in their last at-bat as San Diego closer Kirby Yates imploded.  A one-out single by David Dahl, a two-out RBI single by Charlie Blackmon, another single by Nolan Arenado and consecutive walks by Daniel Murphy and Ryan McMahon cut San Diego’s lead to 8-7.

Yates, having walked in a run, got the hook and was replaced by lefty Drew Pomeranz, the former Rockie. Pinch-hitter Chris Owings worked the count to 2-2 before flying out to center to end the rally.

It was a strange, see-saw game.

Rockies all-star shortstop Trevor Story made a rare but costly error in the sixth inning Friday night, whiffing on a potential double-play grounder. So what did Story do? He turned the page, naturally, making a brilliant throw to first from his butt in the top of the seventh inning, and then swatting the go-ahead solo homer in the bottom of the frame off lefty Matt Strahm.

Story’s homer, his third of the young season, put the Rockies in front, 5-4.

Story wasn’t the only Rockie to deliver a key hit. It took Matt Kemp a single swing to make himself at home at Coors Field while wearing a Rockies uniform. The veteran slugger laced a pinch-hit double to left in the sixth, scoring McMahon and Sam Hilliard for a 4-3 Colorado lead.

The Rockies, for the most part, had played crisp, clean baseball in the first five games of the season, but that changed in the unsightly sixth inning that led to three Padres runs. A leadoff single by Jake Cronenworth, walk by Grisham and bloop single by Machado cut Colorado’s lead to 2-1.

Starter Jon Gray looked like he would escape with minimal damage when Pham hit a hard chopper to Story for a possible double play. But Story fanned on the ball allowing Grisham to score. Then Machado scored on Gray’s wild pitch and San Diego suddenly had a 3-2 lead.

Until the messy sixth, Gray was rockin’ steady, having giving up just two hits and escaping one jam. Cronenworth ripped a two-out triple to right-center in the third but Gray induced Fernando Tatis Jr. to chop out to short, ending the threat. Over 5 2/3 innings, Gray gave up three runs (two earned) on four hits.

Overall, Gray was happy with how he pitched but did say, “I guess I didn’t shut the door.”

Blackmon’s first home run of the season put Colorado ahead 2-0 in the first. He took a long moment before he stepped into the batter’s box to let his walk-up song play out, with the artificial crowd finishing the song off with “Tonight!” Then Blackmon got down to business and blasted Garrett Richards’ 1-1 slider 446 feet and into the second deck above right field.